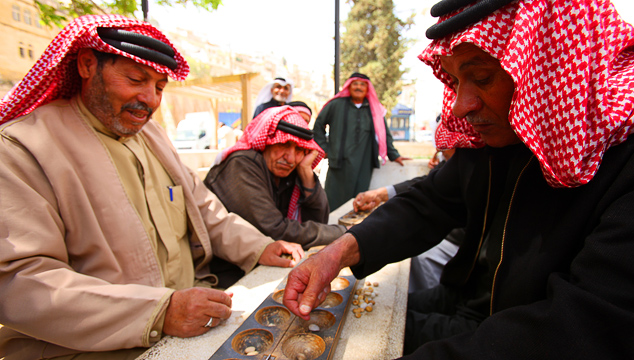 The Romans, Byzantines and Mameluks all contributed to the growth of the town but it was at the end of the 19th and the beginning of the 20th century, during Ottoman rule, when As-Salt enjoyed its most prosperous period.

It was at that time that the Ottomans established a regional administrative base in As-Salt and encouraged settlement from other parts of their empire. As the town’s status increased, many merchants arrived and, with their newly acquired wealth, built the fine houses that can still be admired in As-Salt today.

These splendid yellow sandstone buildings incorporate a variety of local and European styles. Typically, they have domed roofs, interior courtyards, and characteristic tall, arched windows. Perhaps the most beautiful is the Abu Jaber mansion, built between 1892 and 1906, which has frescoed ceilings, painted by Italian artists, and is reputed to be the finest example of a 19th century merchant house in the region.

Tightly built on a cluster of three hills, As-Salt has several other places of interest, including Roman tombs on the outskirts of town, and the Citadel and site of the town’s early 13th century Ayyubid fortress, which was built by al- Ma’azzam Isa, the nephew of Saladin, soon after 1198 AD. There is also a small museum and a handicraft school where you can admire the traditional skills of ceramics, weaving, silk-screen printing and dyeing.

As-Salt’s Archaeological & Folklore Museum displays artefacts dating back to the Chalcolithic period and up to the Islamic era, as well as other items relating to the history of the area. In the folklore museum there is a good presentation of Bedouin and traditional costumes and everyday folkloric items.

As-Salt is just a half hour drive from the city of Amman.